Photography according to Ron 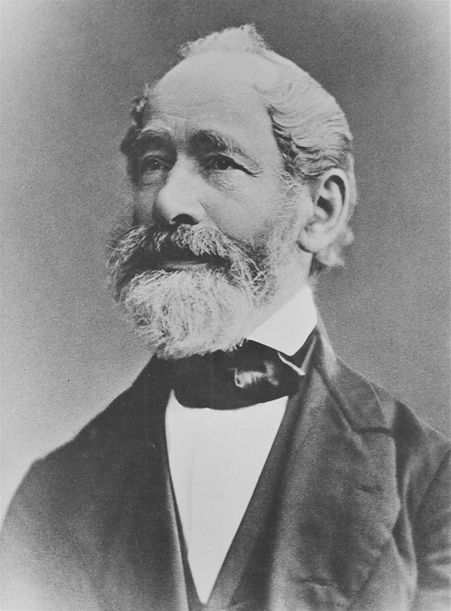 Carl Zeiss was born in Weimar in 1816. In 1846 he started to make high quality magnifier glass in his laboratory in Jena. The original product was a microscope. Because of his methods of trial and error it took Carl Zeiss until 1872 before he succeeded together with the mathematics professor Dr. Ernst Karl Abbe to build a microscope of unparalleled quality. Carl Zeiss died in 1888. His son sold all his interests in the company to Ernst Abbe. Ernst Abbe was very interested in a human treatment of the workers. He founded the Carl Zeiss foundation. This foundation established a new group as the owners of Carl Zeiss. The greater portion of the assets was deeded to the university of Jena. The balance of the company was donated to the employees of Carl Zeiss. This was something very unusual for the late nineteenth century as well as for our times.

In 1890 the Carl Zeiss foundation began the development and production of camera lenses. A Dr. Paul Rudolph developed the Protar. In 1896 he developed the legendary Planar. This lens is one of the most copied lens formulae. In 1902 the Tessar was developed. This formulae is also copied by almost every other lens manufacturer. The Planar and the Tessar are still used today. In 1925 Leitz introduced a 35 mm camera. It was so small that you could easily carry it around, while at the same time it produced high quality pictures.

In 1926 the Carl Zeiss Foundation reacted by buying some small camera manufacturing firms (Ernemann, Contessa-Nettel, Ica, and Goerz) and merging them to form Zeiss Ikon AG. Before the war Zeiss was the European giant in photography and second only to Kodak in the US. In 1933 they even entered a partnership for the development of television.Finally in 1932 Zeiss Ikon produced the Contax I.

The Contax I was Zeiss first 35 mm camera. From the introduction in 1932 until 1936 the Contax I had a lot of problems especially with the shutter. The reason was that Zeiss wanted a metal shutter that travelled vertically over the shorter side of the rectangle Problem was that the shutters were much less robust and reliable then was expected. 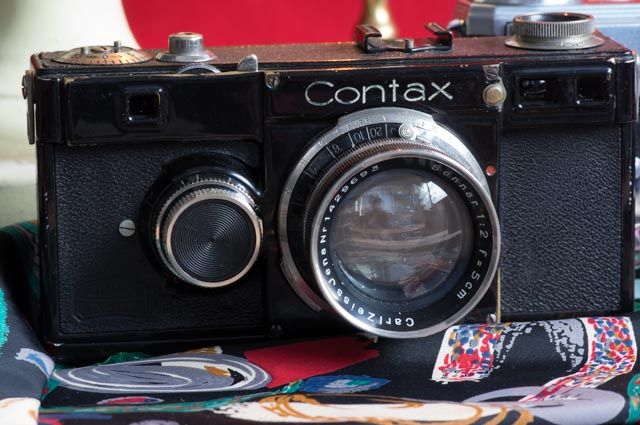 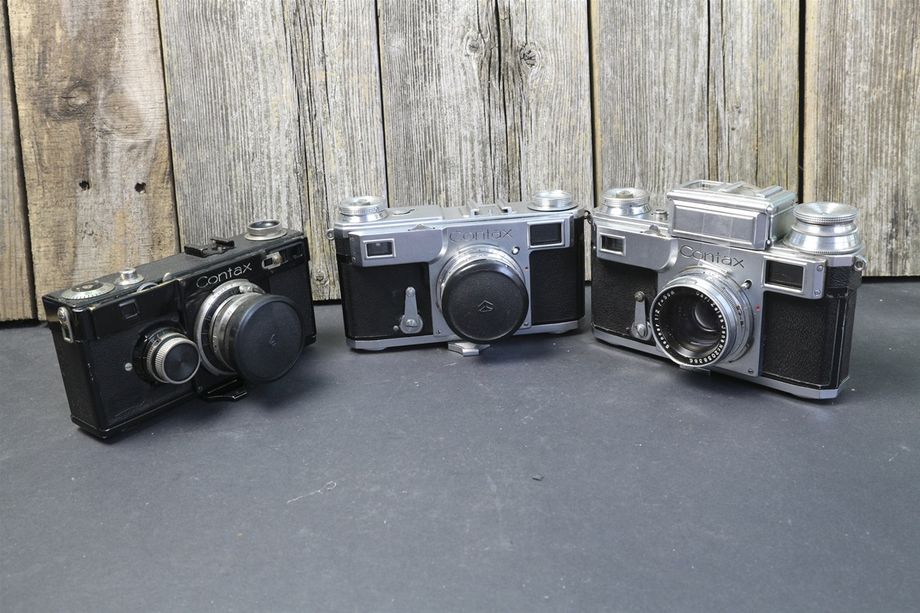 The Super Nettel is a folding rangefinder made by Zeiss Ikon. It is mix of the old Nettel-Contessa and the new Contax I and II. The camera was introduced in 1934 and production ended in 1938.

The Super nettel is a collapsible but stiff camera. The body is made out of a block aluminum.

The Super Nettel used a modern vertically traveling focal-plane shutter with speeds from 1/5 to 1/1000e of a second. This was unique for a folding rangefinder camera. The camera was meant to be a cheaper alternative for the expensive Contax I. It had a fixed lens. As the Super Ikonta and the Contax I it had a coupled rangefinder separated from the viewfinder. Some copies were equipped with the expensive Zeiss Tessar 5 cm 2.8, others with the cheaper Zeiss Tessar 5 cm 3.5 and the cheapest version was equipped with the Triotar 5 cm 3.5.

You can focus the lens by rotating a small wheel on the upper corner of the lens panel. As with the Contax I and II focusing is done with your middle finger while the index finder can rest on the shutter release.

Rewinding the film is a bit cumbersome. The viewfinder prevents to get a firm grip on the rewind knob.

To load the film is not a big problem. You have to remove the back and put the 35 mm cassette in, pull the film out of the cassette and push the beginning of the film in the slot of the take up spool.

In my opinion the Super Nettel is a beautiful camera. It has the look and the feel of a very technically advanced piece of equipment and as the Nettax and Contax I it could have been a requisite in Fritz Langs Metropolis. 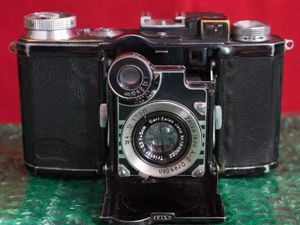 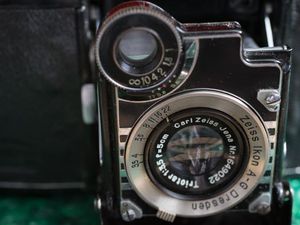 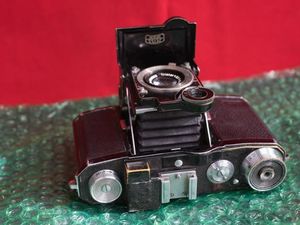 In France In 1934 the Super Nettel was sold for:

For comparison an Zeiss Tengor box camera cost Fr 90 in that same year. According to the currency exchange rate in 1934 you could get 15 francs for one dollar. So in dollars the cheapest camera cost $ 108,00. 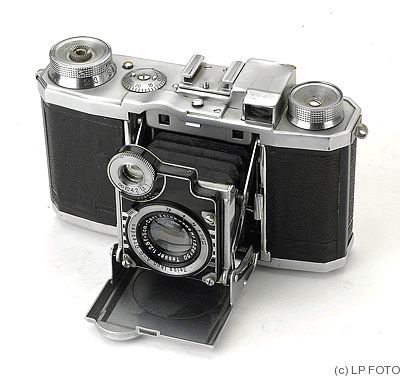 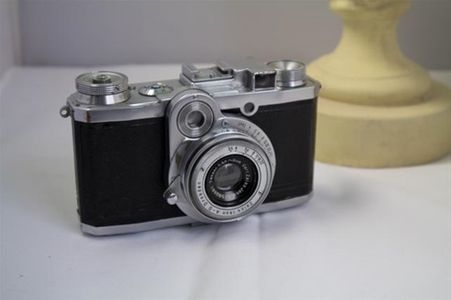 The Nettax was introduced in 1936 as a cheaper alternative to the Contax II. It was the successor of the Super Nettel. In a brochure of Zeiss Ikon they called the Super Nettel and the Nettax the miniatures.

When the Nettax was first shown in 1936 it was even named Super Nettel III.

One might think that the Nettax was just a stripped down and therefore cheaper Contax, but it wasn’t. Almost nothing was interchangeable between the two cameras. The Nettax had a lens mount with specific bayonet. A strange lobe on top contained the rangefinder window.

There were only three lenses made for the Nettax: Two standard lenses: the 50/2.8 Tessar and a collapsible and cheaper 50/3.5 Tessar. There was also a 105/5.6 Triotar telelens. Especially the telelens is very hard to find and therefor rather valuable.

In France In 1934 the Super Nettel III aka The Nettax was sold for:

The war changed a lot for Zeiss. During WWII production shifted from civilian products to products meant for the military. Cameras and lenses were in high demand for them. Although both marks were used Leica was generally the camera the military used.

During the night of the 13e of February 1945 Dresden was bombed and the Zeiss plant was destroyed in the fire bombing. More importantly 25.000 people lost their lives in the bombardments and the following fire storms.

When the war was over Germany got divided between two occupying forces that became more and more hostile to each other. The infra structure was damaged and for a important part completely destroyed and materials were very scarce. Zeiss had been a huge company and was therefore hit very hard by the consequences of the war. Leica on the other hand was much smaller and it escaped the war without significant damage.

At the end of the war Jena was first occupied by the US army. Some parts of Zeiss Jena were relocated by the US army to the Contessa manufacturing facility in Stuttgart in West Germany. Later Jena and Dresden were incorporated into the Soviet occupation zone,which later became East Germany. The remainder of Zeiss Jena was reestablished by the (Eastern) German Democratic Republic (DDR) as Kombinat VEB Zeiss Jena. As part of the World War II reparations the Soviet Army took most of the existing Zeiss factories and tooling back to the Soviet Union as the Kiev camera works. 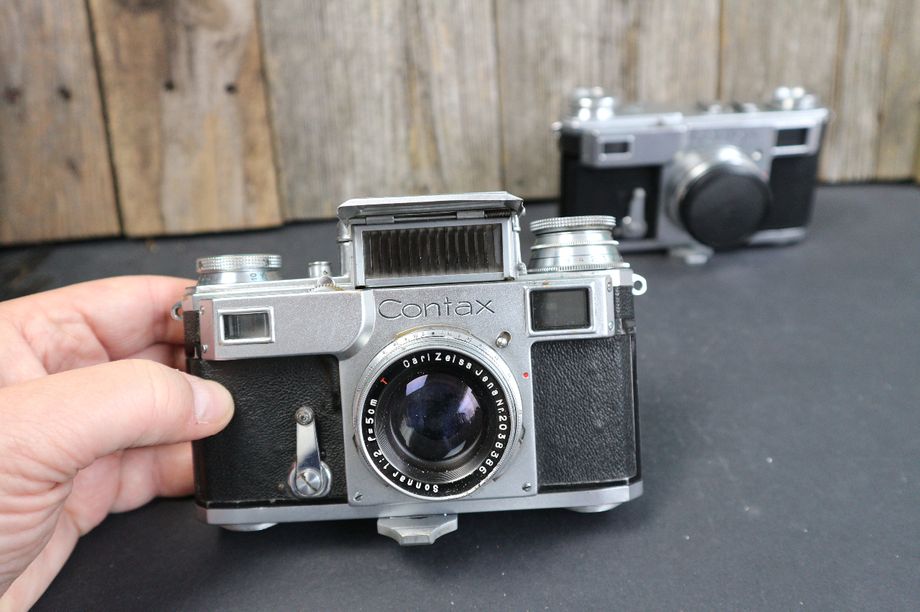 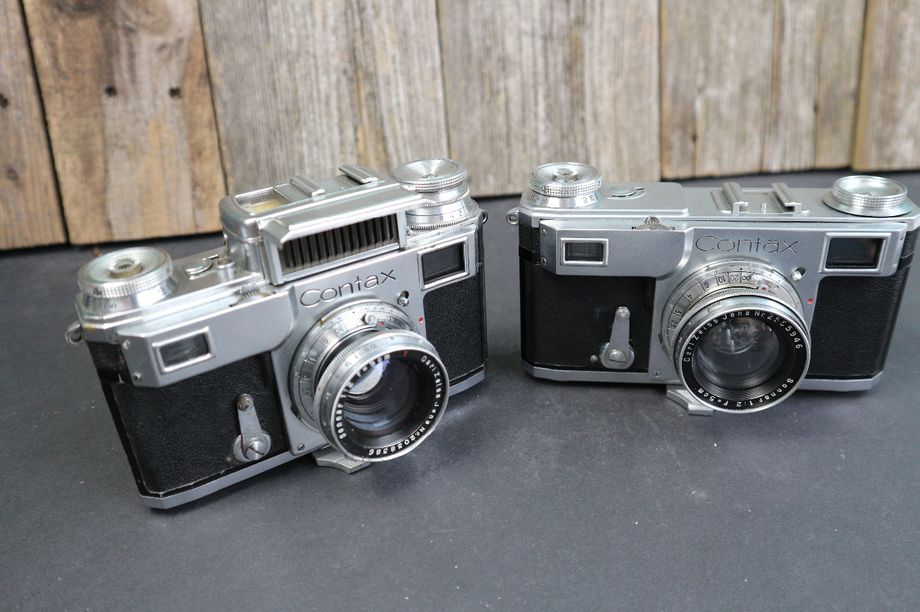 Zeiss Ikon never really became profitable again. In 1956 they acquired Voigtlander, but it took until 1969 to combine the companies and consolidate the production line.

The problems with competing camera lines but most of all the Japanese domination of the camera market , caused production to end in 1971. It was a miracle that they existed so long. They believed that their products were superior but in fact they couldn't march up with the features and the high quality if the Japanese top cameras.

After World War II Zeiss Ikon was split into a West German and an East German part. Stuttgart became the company’s home base in West Germany. 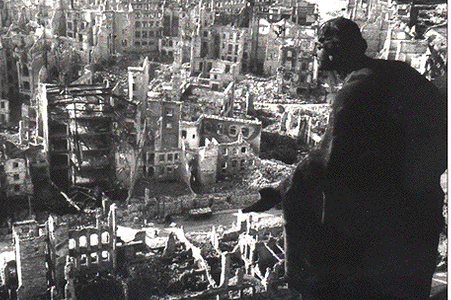 The postwar production in the Soviet occupied part of Germany started early in May 1945, but was interrupted as several factories were closed for dismantling the production tools. The tools were given as recovery payment to the Soviet Union. That had suffered so much demolition during the war. The Soviet Military Forces ordered the remaining staff and designers to produce new drawings for the Contax II and III. The original drawings and tools had been lost in the bombing of Dresden. Zeiss was informed that the Russians intended to set up a production of 5000 Contax cameras a month in a suitable location in the Soviet Union. The working name of this camera project was ordered to be “Volga”.

In 1947 approximately 2000 Contax cameras were built at the Zeiss factory in Jena. The majority of these were the Contax II model, along with a few Contax III and some others wearing the new name; KIEV in heavy Cyrillic block letters. The resulting camera is known as the Jena Contax.

There were also an unknown number of cameras built unofficially. Parts were smuggled by members of the staff, and assembled at home in to complete numberless cameras for selling on the black market.

At the same time the Western part of the Zeiss company had completely redesigned the Contax and in November 1949 the Contax IIa was launched and in March 1951 the Contax IIIa. But not only Leica had restarted production of their cameras almost immediately after the war. In the 1950's there were two Japanese companies who were entering the international camera market: Canon and Nikon. Because due to the war repatriations act all of the technical features of the Contax had lost patent protection. So Nikon could built a copy of the Contax II. They were clever enough to change the troublesome and over engineered shutter of the Contax cameras with the much more reliable Leica shutter. The Canon and Nikon lenses for their rangefinder were just as good as the Zeiss lenses. Funny is that in a lot of writing about these cameras the Russian built Kievs are called copies while about the Japanese built cameras is written that they had adopted the Contax II features. In fact the Japanese were the copies and the Kievs the continuation of the original Contaxes.

The end of Zeiss

From around 1957 Zeiss Ikon started to concentrate on the upcoming slr (single lens reflex) market with the Contaflex and Contarex and in 1961 came an end to the famous but troublesome Contax rangefinders. Leitz had won the rangefinder war. But the taste of victory was not very sweet and didn’t last very long. From 1960 on the Leicas were almost blown away by the very successful Japanese slr cameras of Nikon and Pentax. Not only were the Japanese production costs significantly lower, also the technical features and built quality of their cameras could more then match the German cameras.

In 1972 these events let tot the demise of Zeiss Ikon. Portions of Zeiss Ikon were sold to other camera manufacturers but others disappeared entirely. The Carl Zeiss lenses were